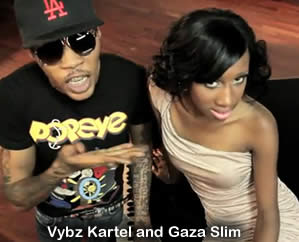 Portmore Empire singjay,Vanessa Saddler, more popularly known as Gaza Slim, has become the third member of the “Gaza” group to face a charge in relation to a case involving the group’s leader, Vybz Kartel.

Gaza Slim, otherwise known as Vanessa Bling, was formally charged on Friday morning with conspiracy to pervert the course of justice in relation to the Clive “Lizard” Williamsmurder investigation. This took place four days after the Empire singjay turned herself in to the Constant Spring Police after she was named a person of interest in the Kartel matter.

Gaza Slim’ predicament resulted from an alleged false police report that she filed on October 29; claiming that Williams, who Kartel and others stand accused of killing, robbed and gun-butted her in Havendale, St. Andrew. However, law enforcement officials recently insisted that they have a cellular phone containing a text message where Kartel ordered Gaza Slimto concoct the robbery story in an attempt to aid his defence. As a result, Gaza Slim will at least spend this weekend in jail.

Gaza Slim joins fellow Empire singjay, Shawn Storm and Kartel’s road manager, Calvin “Moonie” Haye and Cayro Jones as associates of “Di Teacha” who are jointly charged in Williams’s murder. Kartel faces a December 19 hearing when a bail application in the matter will likely be made.