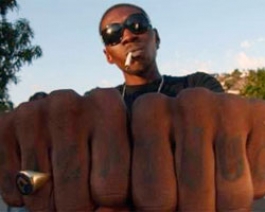 Vybz Kartel and the recent voicing of his love for ‘Clarks’ footwear has caught the attention of at least one newspaper in the United Kingdom.

An article published in The Sun yesterday thanked the artiste for making the brand overwhelmingly popular in Jamaica.

The author John Coles begins the article by saying, “One of Britain’s most traditional shoe brands has become a massive hit in Jamaica – thanks to a reggae rapper.”

He then continues, “Clarks shoes are now must-have items on the Caribbean island with prices soaring, shops selling out and thieves targeting them. Local music star Vybz Kartel released a single called Clarks earlier this year, with the cover carrying pictures of his favourite styles – Wallabees, Desert Boots and Desert Treks.

The author even uses a line from Vybz Kartel’s Clarkes.

He writes, “the rap features the catchy chorus line: “Everybody haffi ask weh mi get mi Clarks,” before going on to mention that the deejay has since released follow up singles titled Clarkes Again and Clarkes 3 (Wear Weh Yuh Have).

According to the article, Clarks is a 185-year-old family-run company from Street, Somerset in the UK and were on the verge of closing down their main factory in 1996 in the midst of the loss of some 400 jobs and a drop in sales. Sales would eventually increase thanks to the feet of trendy entertainers.

“… they enjoyed a huge boom the following year when Oasis superstars Liam and Noel Gallagher started a trend for their Desert Boots. Thousands of indie fans followed in their footsteps and stars including The Beastie Boys, Patsy Kensit, The Spice Girls, Paul Weller and Jarvis Cocker also sported the shoes,” the article states.

The article also quotes Kartel as saying he has more than 50 pairs of Clarks.

“Clarks is as much a part of the Jamaican culture as ackee and saltfish and roast breadfruit, I swear to you. Policemen wear it, gangsters wear it. Big men wear it to their work. Schoolchildren wear it to school. I personally have more than 50 pairs of Clarks. I have more than there are states in America.”

Michael Borge, marketing director for Clarks in North America, confirmed the company has seen increased demand in Jamaica in recent months, the article also states before adding that “the popularity of the brand is also rising in Britain as Kartel’s song is regularly played on black music station BBC 1Xtra by DJ Robbo Ranx.”

In the meantime, however, deejay Vybz Kartel, real name Adidja Palmer, remains in police custody here in Jamaica, as he turned himself in last week after he was among six persons listed by the St Catherine South police as a major person of interest.